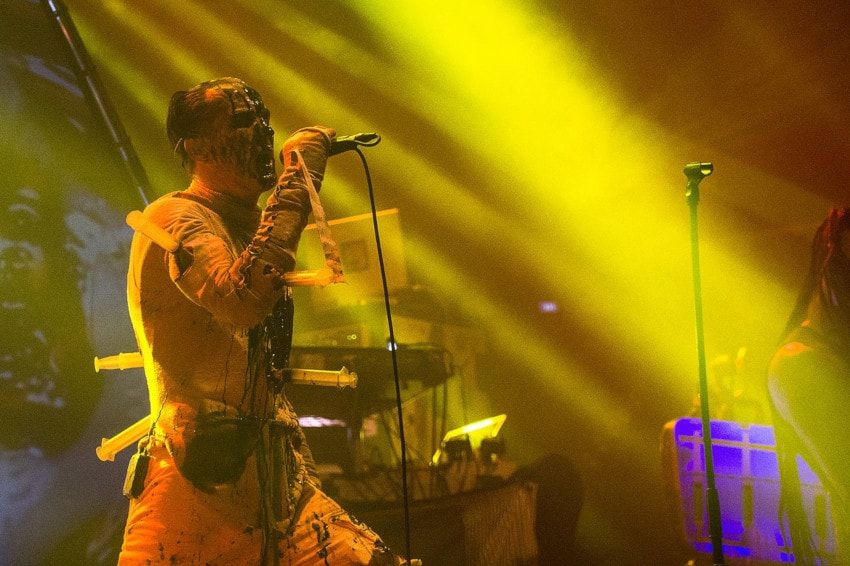 Nevik Ogre. Photo by Nickolay Pirogov, CC-BY-SA-2.0
My previous post on non-human musicians reminded me of Skinny Puppy, an electro-industrial band I obsessed over in my late teens. I hadn't heard them since Last Rights was released back in 1992, so I binged-listened to every album before writing this post.
The present me, the guy who listens to Bill Evans Trio like a whale drinks water, still understands the appeal of 'Puppy. Their music is an intoxicating concoction of samples, heavy beats, strange alien soundscapes and growling stream-of-conscious vocals. The song titles are often stylized and/or employ clever wordplay (i.e. I'mmortal, Lust Chance and Spasmolytic). As influential as they were, their sound is singular even today. The earlier albums especially are teeming with creativity, although after Last Rights founding members cEvin Key and Nevik Ogre seem to have lost their innovative edge.
So how did Skinny Puppy find their unique sound in the first place? According to Key in an interview with the Phoenix New Times, they saw an opportunity to create and innovate between the confrontational art-noise of Throbbing Gristle and the dance-friendly industrial music of Cabaret Voltaire. Essentially, the music Key wanted didn't exist so he invented it. I suppose dhymn is a similar opportunity, in the sense that I'm creating something new from two different, even opposite musical genres (hymns and djent).
Skinny Puppy went on to release 12 studio albums. Two of them (Bites and Remission) earned certified gold status in Canada.
While revisiting (and reveling) in their discography I made a playlist of my favorites for the gym, but I'm going to delete it. Skinny Puppy is a dark sound coming from a dark place. Their themes center around addiction, violence and mental illness, themes I deal with every night at the homeless shelter. Now I crave the light. I need to feel uplifted, and be able to uplift others.
No more Love in Vein. I'll take In Love In Vain instead.
comments powered by Disqus